Winter Sports in Europe: where to stay?

Europe is one of the most montainous areas in the world:from the Pyrenees to the Alps, through the Balkans, the Caucasus, the Scandinavian  Alps and the Carpathians. Thus, it is in winter when it is one of the best times to enjoy this advantage and practising sports such as skiing or snowboarding, or just spending some time relaxing in areas full of snow and nature. In each case, where to stay? 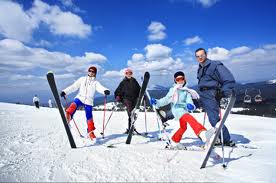 The Pyrenees: undoubtedly, they are the most recurrent place for Spaniards who want to practise winter sports. Even more recently, also the French, the British and the Portuguese opt for the Pyrenees. With so many tourist tradition, it is an area where any type of winter sport can be practised, and accommodations abound, usually at a quite affordable prices. In the Pyrenees, it can be found from hotels to country houses, apartments for large families or guest houses. It depends on your choice.

The Alps: it is the most famous mountain range among lovers of winter sports in Europe. Whether in northern Italy, as in Austria, France, Switzerland, Germany and Slovenia, it’s been a long time since the Alps started welcoming sporty people and they have hundreds of hotels, apartments and villas for them. Yes, prices can be exorbitant, especially in the western zone of the Alps (Switzerland, Austria, etc..). If you look good, you can get a room for less than € 100 a night, there are even near the tracks that offer accommodation at reasonable prices. Do you research patiently.

The Balkans: the range is between Serbia, Bulgaria and Romania. These are countries with lower living standards than the European average, so prices are also lower. In this case, the mountain accommodations are the most recommended. There are also many hotels and resorts. Choosing one or another depends on the priorities of the traveler.

The Caucasus: they occupy countries such as Russia, Georgia, South Ossetia, Armenia and Azerbaijan, and they offer countless places to stay in. Accommodation usually has very affordable prices, finding bids near ski slopes for less than 40 € per night. Mount Elbrus, of 5.642 metres, is one of the main tourist attractions. The hotels range from the modern blocks of flats to country houses adapted to many visitors.

The Scandinavian Alps: these are extended by Norway, Sweden and Finland, some of the most expensive countries in Europe. So spending a few days there will mean spending large sums of money to sleep, to eat and to practice any kind of sport, awhich are already expensive by themselves. It is also true that these countries are well prepared to welcome tourists and they offer the highest quality and comfort. Thus, in Norway, which is where the largest number of skiers go every year, you can find plenty of hotels and cabins, both at the track and also in the middle of the mountain.

The Carpathians: this mountain range stretches from Ukraine to Austria, making its mark in Hungary, Poland, Romania, Czech Republic, Slovakia and Serbia. Thus, it is easy to find accommodation in these countries. Prices depend according the location, but only in Austria is where the guest will have to take into account the pocket when choosing a hotel or another one. Even so, apartments and cottages abound in the area, which can be much more attractive than the traditional resort hotel. There are very affordable pensions in Slovakia, where paying less than 10 € per night you can sleep and have breakfast. Furthermore, in this country is where the higest mountains of the Carapthians are concentrated.